Prague Rocks festival announce line up for its third edition. On Wednesday, June 22nd, at the Letňany airport in Prague, Metallica, Five Finger Death Punch, Steel Panther and Red Fang will welcome visitors to the summer of 2022. Tickets are available to purchase at www.ticketmaster.cz and/or www.ticketportal.cz, priced from 1990,- CZK.

Formed in 1981 by drummer Lars Ulrich and guitarist/vocalist James Hetfield, Metallica has become one of the most influential and successful rock bands in the history, having sold nearly 120 million albums worldwide and generating more than 15 billion streams while playing to millions of fans on all seven continents. Among many others, they won nine GRAMMY Awards, two American Music Awards and multiple MTV Video Music Awards. In 2009 Metallica were inducted into the Rock & Roll Hall of Fame.

Five Finger Death Punch was founded only in 2008, but during relatively short time they have already released eight studio albums, which have made them known to most metal fans. Band’s latest release F8 (2020), debuted at #1 on on Rock charts worldwide with a Top 10 Mainstream chart debut in the US, Austria, Australia, Canada, Finland, Germany, Sweden, Switzerland, UK and more.

Emerging in 2005, in Portland, Oregon, Red Fang capture the loud and fast, anything-goes spirit of classic rock with their heavy stoner-influenced jams. The quartet found mainstream success in 2013 with their Billboard-charting third release, Whales & Leeches, and continue to hone their unrelenting, no-frills sound on subsequent efforts like Only Ghosts (2016) and Arrows (2021).

Hailing from Los Angeles, the epicenter of rock n’ roll in all its debauchery and glamour, Steel Panther is a comedy-rock band that brings a satirical spin to ’80s glam metal. All of their five full-length studio albums have reached No. 1 on Billboard’s US Comedy chart. The band also made an appearances on a high-profile TV shows such as Jimmy Kimmel Live, Larry King Now and FOX NFL. 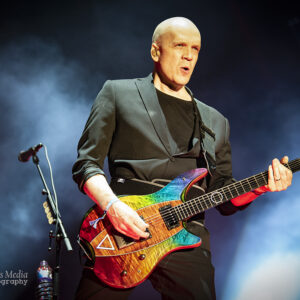